Research In Motion Ltd. will write off much of its PlayBook inventory and book a $360-million after-tax charge due to poor sales and discounting of the tablet, a move that will impact the BlackBerry maker’s financial targets. 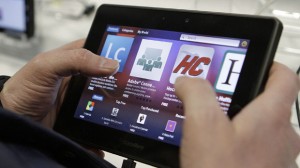 “RIM is committed to the BlackBerry PlayBook and believes the tablet market is still in its infancy,” Lazaridis said.

The impact of poor PlayBook sales will cause RIM to miss its full-year forecast of earnings per share between $5.25 and $6, RIM said, as costs rise.

Third-quarter adjusted earnings per share are expected to come in “at the low to mid point” of $1.20 to $1.40.

Sales of the PlayBook haven’t been able to make a dent in the competition from Apple’s iPad or Android-based tablets.

1. Why do you think RIM sales for their playbook has declined?

2. Which product have consumers embraced?