Female CAs have come a long, long way since their beginnings in the profession. How do they see the road ahead? 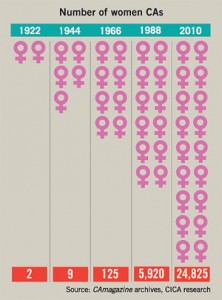 By all accounts, Janice Rennie is a pretty inspiring woman. Based in Edmonton, this FCA and mother of two sits on six boards, is a former owner of two businesses, has held numerous senior management positions and stays active in several charities. This year, she was elected a Fellow of the Institute of Corporate Directors, having already earned her fellowship from the Institute of Chartered Accountants of Alberta in 1998.

But Rennie will be the first to say the path to success has included its share of trials. During her early days as a CA in the 1980s, she recalls a client who didn’t want to work with her because she was a woman. “I was well regarded in the firm, but the client didn’t see how a woman could bring any value to the business,” she says. Her firm backed her up, but the experience set the precedent for how Rennie would approach her career going forward: “To be equal, I knew I had to be better than the guys.”

Rennie’s hard work paid off and in 1990, at the age of 33, she was asked to join her first board at NOVA Chemicals (then called Nova Corp. of Alberta). Not only was she the only female on the board; she was the youngest member by at least 20 years. “I knew I was plunging into an area where men traditionally walk,” she says.

Today, women make up a third of all members of the profession. About half of new entrants are female, compared with 23% when Rennie graduated in 1981 and a paltry 2% in 1970. From 2009 to 2011, women secured the overall highest standing in Canada on the Uniform Final Evaluation and last year, they garnered all the regional gold medals as well. (At the time of writing, the 2012 results had yet to be released.) Many of the major CA firms across the country have recognized the potential of their female employees by implementing initiatives geared specifically to helping women succeed in leadership roles.

As the boomers retire and more women move through the profession, Taub says there will be an inevitable changing of the guard that will hopefully entail a leadership consisting of both women and men who are open to customizing the work environment. In the interim, she believes there should be policies in place to train people who evaluate talent to be more objective. “The traditional model of working in an office 80 hours a week may not work for everyone,” she  says. “There is talent out there that will get the work done in an untraditional way.” Fortunately, some firms have already made major strides in introducing such policies. The CICA’s Work/Life Balance Report shows one in two respondents (52%) work for an employer that has policies to handle gender issues. Flexibility around work arrangements is also gaining popularity, with two in three respondents reporting that their employers offer flex time. Some benefits, such as summer hours and flex time, are catching on with both genders, although women are still the major users .

1. Why is it still difficult for women to achieve the CEO positions?

2.  What do you understand by Work/Life balance?

3.  Would flex time be a good thing for all employers to offer their employees.