A former TransCanada engineer says he reported its substandard practices to the federal energy regulator because he believed the company’s management, right up to the chief executive officer, refused to act on his complaints.

In an exclusive television interview with CBC News, Evan Vokes said he raised concerns about the competency of some pipeline inspectors and the company’s lack of compliance with welding regulations set by the National Energy Board (NEB), the federal energy industry regulator.

Vokes said he refused to back down and the workplace friction eventually took its toll.

“It was unbelievable the effect it was having on my health,” Vokes told CBC News chief investigative correspondent Diana Swain. “I was certainly on my way to a heart attack, or a stroke, for sure. There is no doubt about it.”

Vokes said he met with the Calgary-based company’s vice-president of operations, and he also wrote a detailed letter to TransCanada Corp. chief executive officer Russ Girling. Frustrated, he finally made a formal complaint to the NEB, a version of events confirmed in an interview by the board’s chief engineer.

“We understand he went right through the chain of command to the top in [TransCanada Pipelines Ltd.],” Iain Colquhoun said in an interview.

“Evan Vokes took the initiative to try and resolve the problem using the internal procedures and we would encourage people to do that,” Colquhoun said. “But having not got there, he took the extra step of involving the regulator, and we would certainly encourage that.” 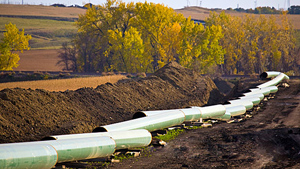 The regulator warned the company it would not tolerate further infractions of regulations related to welding inspections, the training of pipeline inspectors and internal engineering standards. It also announced a further audit of the company’s inspection and engineering procedures.

‘We are confident that any remaining concerns the regulator has about compliance and pipeline safety will be unwarranted.’—TransCanada statement

“Pipeline safety is of paramount importance to the NEB, and it will take all available actions to protect Canadians and the environment,” the regulator stated.

In an email statement to CBC News, TransCanada said “our reviews concluded that the items raised by the former employee were identified and addressed through routine quality control processes well before any facilities went into service.

“We are confident that any remaining concerns the regulator has about compliance and pipeline safety will be unwarranted,” the TransCanada statement said.

The NEB is continuing its investigation of TransCanada and warned that if the company doesn’t fix the identified problems, it “will not hesitate to impose appropriate corrective actions.”

Many of the complaints by Vokes focused on TransCanada’s practice of allowing its pipeline and fabrication contractors to hire the inspectors that would be inspecting the contractors’ work.

In 1999, the NEB imposed a regulation which requires the companies contracting the work, such as TransCanada, to supply independent inspectors to inspect the contractors’ work.

“There is an inherent conflict when a prime contractor does his own inspections,” Vokes said, especially when the project involves gas pipelines under high pressure because the consequence could be greater since it relates to public safety.

“In pipelining, there is a huge amount of stress for a very thin pipe,” he said. “You certainly should be paying attention to what is wrong with your pipe, making sure nothing happens to it, and there are no injurious defects to your pipe as it is being put into the ground.”

Vokes said the NEB regulation ensures contractors can’t pressure inspectors to sign off on work that is not up to code.

TransCanada has publicly admitted it did not always follow this regulation in the past, but said it was industry standard. Vokes said TransCanada believed independent inspection slowed production, driving up construction costs.

To read the complete article: Click or Visit CBC news

If you have more information on this story, or other investigative tips, please email [email protected].

2. How would you rate the risk of poor inspection, High, Medium or Low? Support your decision.

3. What additional process controls would you put in place to ensure that no defective pipes or substandard installations occur during the pipelining process?