THE rampant use of tax havens by large companies to reduce their tax bills has been moving up political agendas. 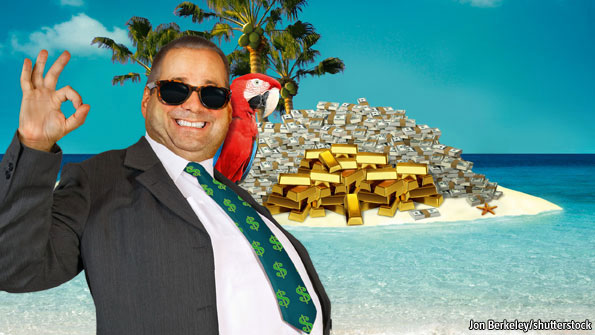 The G8 and G20 have called for action to curb the practice. They worry that the international network of treaties and rules designed to avoid the double taxation of multinationals has instead allowed them to enjoy widespread double non-taxation. The Organization for Economic Co-operation and Development (OECD), which crafts international tax rules and guidelines, recently produced a report on profit-shifting and has promised to unveil firm proposals by the summer of 2013.

It is unclear precisely what the OECD will recommend, but it appears to be leaning towards patching up the existing framework rather than embracing an entirely new approach. Many independent tax experts—those who don’t work for multinationals—argue that this would be a missed opportunity, given how easy it has become to game the system.

How do we fix the tax avoidance problem?

One of the most intriguing (and refreshingly straightforward) comes from Jeffery Kadet, a former tax partner with Arthur Andersen, who now teaches at the University of Washington School of Law. Mr Kadet believes the answer lies in adopting a “worldwide full-inclusion” system of corporate taxation, an approach that has received surprisingly little attention, given its merits. Here’s his proposal:

We see in the media almost daily items about the detrimental effects of tax havens in general and corporate profit-shifting in particular. Profit-shifting is the structuring by multinationals of their cross-border operations to minimize taxes imposed in both their home countries and the countries where they actually operate, and the movement of those profits through legal planning into subsidiaries in low-tax jurisdictions. The goal is to achieve “double non-taxation”: no tax in countries where operations and revenues occur and no tax in the company’s home country.

So successful has big business been at achieving this goal—and thus eroding the tax bases of both leading economic powers and developing countries—that the issue has shot up the agendas of the OECD, the G8 and the G20. All are looking for solutions.

Countries are urged, for instance, to tighten rules on “transfer pricing” of transactions between subsidiaries in different countries; or to strengthen their “general anti-avoidance rules”. Such rules might make profit-shifting a bit more difficult, but they won’t solve the problem. The same goes for country-by-country financial reporting, which would make profit-shifting easier to identify but wouldn’t eliminate the motivation to seek double non-taxation.

That motivation will only disappear if management knows that the group’s worldwide income will always be taxed, and that no amount of planning or developing complex schemes can avoid it. That is why the only real solution is to force current (ie, non-deferred) taxation on 100% of a multinational’s worldwide income, with no exceptions.

What mechanisms could accomplish this?

One that’s sometimes discussed is “unitary” taxation, under which all countries agree to a formula that would allocate the worldwide profits of each company among the countries in which it has operations, employees, assets and revenues. Each country would then tax its allocated share at its domestic tax rate.

This approach has merit. However, it is hard to imagine countries around the world agreeing on an allocation formula, including rules covering details like where to locate valuable intangible property. Then there’s the Herculean effort of implementing the system through domestic legislation in each country. And unless all countries signed up, the system would likely result in some double taxation and some double non-taxation.

Fortunately there is another way forward, and it is one that could work even if adopted by less than all countries and in varying forms that reflect individual countries’ needs. It would require the countries that embraced it to abandon the “territorial” and “deferral” systems that have become popular and instead adopt a worldwide “full-inclusion” system.

So what is a worldwide full-inclusion system? And how would it significantly dampen a company’s enthusiasm for profit-shifting?

Under this approach, each company’s home country would impose its normal corporate-tax rate on the group’s worldwide income. Importantly, this would include income earned by foreign subsidiaries, and deferral would not be allowed. A foreign tax-credit mechanism would prevent the double taxation that would otherwise occur from the same income being taxed once in countries where operations occur or revenue is earned and then a second time by the home country.

As a result, 100% of the group’s earnings would be subject to at least the home-country tax rate. Complex structures and schemes to move profits into tax havens would no longer be effective since even these offshore earnings would be swept up and taxed currently as earned by the home country. The motivation for such profit-shifting vanishes.

Can it actually be implemented?

Economists may have mixed feelings about a worldwide full-inclusion system. They often point out that taxation systems that focus on the “source” of income have a number of theoretical attractions. Some also argue that “residency” (ie, home-country taxation of everything) is not a great basis on which to build a tax system because place of incorporation and management and control, the most typical determinants of residency, can be easily manipulated. However, it is clear in today’s globalised world that the profit-shifting incentive created by “source”-based taxation systems is so strong that it far outweighs any theoretical benefits these systems might provide.

Moreover, there are other benefits of adopting the full-inclusion system. It should create a more level competitive playing field within each country among homegrown multinationals, foreign multinationals that do business there and purely domestic businesses. The last of these are at a big disadvantage under the present system because they don’t have the same opportunities to reduce taxes using offshore structures. Under a full-inclusion system, there would be a more level playing field globally for multinationals from different countries as each would be subject to a minimum level of taxation as imposed by its home country. Competition will not be played out through which multinational is more creative or aggressive in its tax planning.

Another benefit is simplification. While the transition period could be messy, in the long run the new system would be more straightforward than today’s tax labyrinth.

Finally, there would be a feelgood benefit. Multinationals stand accused of not paying their “fair share” of taxes. With a worldwide full-inclusion system in place, the home country’s tax rate, which presumably defines “fair share”, would apply to all. So, in the future, big companies could avoid being labelled as “immoral” or “unethical”, at least in regard to their taxpaying habits.

To read the full article click , The Economist , A Modest Proposal

Canada to clamp down on corporate tax dodging

Ontario is urging the federal government to help them clamp down on corporate tax dodging.

Ontario Finance Minister Charles Sousa is asking for help to close loopholes that allow corporations to avoid paying taxes by shifting their profits and losses across Canada.

He says it could bring in $200 million by 2017, according to the commission that made recommendations last year on how Ontario could slay its $12-billion deficit.

1. Do you believe that corporate loopholes can be put in place to capture full taxation from public corporations?

2. The Full Inclusion System recommends taxing profits from all countries, is this approach feasible and achievable?

3. What system would you implement to ensure that corporations pay their fair share of taxes?