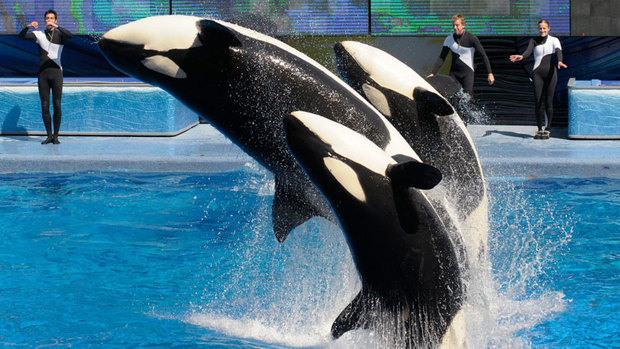 SeaWorld Entertainment Inc. made a splash Friday in its first day of trading on the New York Stock Exchange.

Shares of the owner of theme parks famous for water shows featuring killer whales and dolphins jumped $5.29 US, or 19.6 per cent, to $32.29 in afternoon trading, after the company and its backers raised $702 million.

The initial public offering of 26 million shares was priced at $27 per share, which was at the high end of the expected range of $24 to $27 per share. The IPO’s size also increased from the 20 million shares that SeaWorld and its owner, private equity firm Blackstone Group LP, had hoped to sell.

SeaWorld offered 10 million shares, while Blackstone offered 16 million shares. The pricing of the offering and boost to its size suggests that there was solid demand for the shares.

From its origins as a Busch Gardens animal park at Anheuser-Busch’s Tampa Budweiser brewery, the company has grown to span 11 theme parks housing 67,000 animals. Besides the three SeaWorld parks, the company owns two Busch Gardens parks, several water parks and Sesame Place, an amusement park based on the children’s TV show Sesame Street. It had net income of $77.4 million on revenue of $1.42 billion in 2012.

Francis Gaskins, president and editor of IPODesktop.com, said SeaWorld is appealing in part because its properties are particularly kid-friendly, even more so than those of peers like Six Flags and Cedar Fair LP.

“SeaWorld has become an iconic brand that is basically impossible to duplicate in this difficult regulatory climate,” he said.

SeaWorld had warned in a December filing with the Securities and Exchange Commission that its business is dependent on customers’ willingness to spend on leisure and entertainment. The company has managed to do well despite lingering concerns about the economy and high unemployment in the U.S. Its revenue has risen in the time it’s been owned by Blackstone.

1st park started in 1959 by Anheuser-Busch

Anheuser-Busch started Busch Gardens in Tampa in 1959. The beer company bought SeaWorld, whose park opened in San Diego in 1964, in 1989. SeaWorld is now based in the theme park mecca of Orlando, Fla., also home to Walt Disney Co.’s Walt Disney World resort and Universal Studios. More than half of SeaWorld’s revenue is generated in Florida.

SeaWorld said about 24 million people attended its 11 parks during the 12 months ended Sept. 30. The company did not disclose how that figure has grown or shrank in the past few years, but says it has a “stable attendance base.”

Some of SeaWorld’s competitors have had a difficult climb back from the recession. Amusement park operator Six Flags Entertainment Corp. filed for bankruptcy protection in 2009, emerging in mid-2010. It has been growing revenue since then, although it posted a loss in 2011.

SeaWorld will receive about $245.4 million in proceeds after discounts. It plans to use the money to repay debt and to pay a one-time fee to Blackstone.

The company won’t receive any proceeds from shares sold by Blackstone, which bought it from the brewer Anheuser-Busch InBev for $2.3 billion in 2009. Blackstone will still have a majority stake in SeaWorld after the IPO.

The total proceeds collected by the Broker would be $270,000,000 from their clients.

Journal Entry to be recorded by SeaWorld:

A note will be included in the financial statements of changes in equity, that 10,000,000 million shares were issued.

Subsequent to the above transaction the shares increased by 19.6%, to $32.29 per share.

This means that the shareholders who purchased shares at the IPO (Initial Public Offering) price of $27 made a profit of  $5.29 in the first day of trading.

1. What percentage commission did the Broker make on the initial selling of SeaWorld shares?

3. Does the Secondary Market purchases and sale by investors, have any effect on SeaWorld accounting?

Answer to question 3: No effect the gains and losses are recorded by each investor.