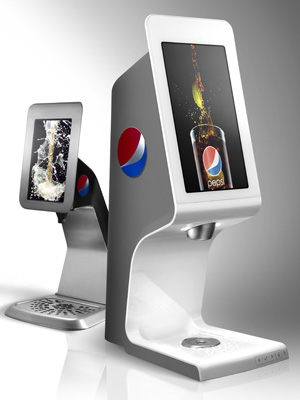 PepsiCo says it plans to start testing a new fountain machine at restaurants that lets people create a variety of flavor combinations, such as strawberry Mountain Dew.

The test follows Coca-Cola’s introduction in 2009 of its Freestyle machine, which also lets customers touch a screen to pick from a wide array of flavor combinations. PepsiCo’s test is set to begin at five restaurants in Denver, Colo., next week.

Fountain sodas at restaurants, movie theatres and other outlets are an important part of the broader industry, representing about a quarter of overall sales volume, according to the industry tracker Beverage Digest. Coca-Cola Co., which is served in chains including McDonald’s and Wendy’s, has about 70 per cent of the fountain business.

PepsiCo Inc. has about 30 per cent and is served at chains including Taco Bell, Pizza Hut and KFC, which it previously owned.

She said the company has other tests planned and that the Touch Tower being introduced in Denver is the first in a series of new fountain equipment the company is considering. The test was first reported by Beverage Digest.

Coca-Cola’s Freestyle machine also lets people pick from a wide variety of unique drinks, such as Caffeine-Free Diet Coke with lime or Minute Maid Light Orange Lemonade. Unlike the PepsiCo machine, however, Freestyle’s options are all preset and don’t let customers mix and match flavors.

The PepsiCo Touch Tower is also much smaller than Coca-Cola’s Freestyle, which is roughly the size of a vending machine.

PepsiCo says its machine, which has a tablet-like screen, is intended more for outlets that don’t want equipment that takes up a lot of space. The company says it’s also developing other machines that would suit variety of needs.

Coke will see an impact on its top-line growth if the Freestyle gains widespread adoption.   The Freestyle may also prove its value as a marketing tool. Coca-Cola’s global strategy rests on the enhancement of its core capabilities, one of the pillars of which is consumer marketing. Around the world, Coke engages in a herculean effort to direct eyeballs to its brands. In developing markets, the company fights for carbonated cola shelf space, but it also has to win shelf placement in the increasingly crowded varieties of non-carbonated drinks that Coke and its competitors offer. Installing Freestyle machines in developing markets could leverage Coke’s marketing efforts by engaging consumers to try new brands. Thus, customers might first encounter a label via the Freestyle, enjoy the taste, and then find the same drink for purchase in bottled form in nearby grocery and convenience stores.

Coca-Cola will also reap valuable customer insight by mining the data from the machines. Every Freestyle maintains a data connection to Coke headquarters and uploads information about each drink dispensed and all supplies used. The company should enjoy a wealth of real-time information about ordering habits and popular flavors that may be candidates for bottling in local areas, not to mention cost information from the supplies data.

Benefits to restaurants
In theory, the Freestyle should be sought after by restaurants as well. Firehouse Subs, which claims that it was the “first brand to advertise” the Freestyle machine, reports a double-digit increase in sales in the first quarter of last year from its marketing partnership with Coke. Burger King Worldwide (NYSE: BKW  ) has signed on to place a Freestyle machine in every one of its company-owned stores, although this is less impressive than it sounds, as the company is in the process of selling its stores and transitioning to a 100% franchisee store-owned model.

The chain that can exert a disproportionate influence on Freestyle acceptance is, of course, McDonald’s (NYSE: MCD  ) . One of the most visible purveyors of Coke products, McDonald’s would probably welcome the widespread adoption of the Freestyle. After all, the Golden Arches have recently encountered some consumer fatigue. McDonald’s U.S. sales have been stalling recently. It could use an incremental sales injection generated by the Freestyle, even if it’s temporary.

The most powerful quality control inspector: the customer
Which brings us to a surprising supersized “if”: The Freestyle may suffer from a small but tangible quality issue. As reported by website Benzinga earlier this year, a common complaint regarding the Freestyle is the residue of flavor left from previous drinks. The customer in front of you who orders an Orange Vanilla Hi-C may leave behind a tiny residual flavoring in the tubes that colors the taste of your straight-up, traditional Coke. You can bet that McDonald’s, to whom standardization is a directive, won’t fully implement a fountain for which it cannot assure a consistent taste across its highest-selling drinks. In addition, existing Coke fountains allow for multiple simultaneous servings, whereas the Freestyle can accommodate only one customer at a time. Of concern to McDonald’s as it tests the Freestyle will be the speed at which customers can self-serve inside restaurants.

1. Have you tried the Coca-Cola Freestyle? Discuss your experience.

2. Do you agree that PepsiCo has to constantly compete with Coca-Cola in order to meet consumer demands?

3. Would you compete head to head with Coca-Cola, if you were a PepsiCo marketing director?