The highest paid CEOs have gained more ground in Canada, and are now making nearly 200 times the average Canadian wage, according to a new report. 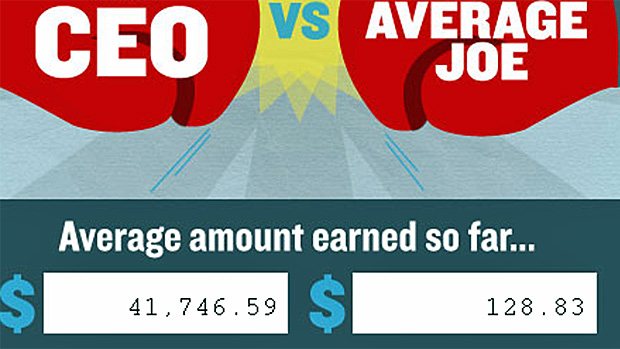 The 100 highest paid chief executives whose companies are listed on the TSX composite index made an average of $8.38 million in 2010, according to figures pulled from circulars by the Canadian Centre for Policy Alternatives, a left-leaning think-tank.

Most Canadians, on the other hand, have seen their wages stagnate over the past few years. In 2010, after adjusting for inflation, average wages actually fell.

“The gap between Canada’s CEO elite 100 and the rest of us is growing at a fast and steady pace, with no signs of letting up,” says economist Hugh Mackenzie, who authored the report.

“The extraordinarily high pay of chief executive officers is more than a curiosity. It actually is a reflection of a troubling redistribution of society’s resources in Canada and the United States, and in most of Western Europe,” he said in an interview.

It means that by noon on Jan. 3, the average top executive will have already made as much money as the average Canadian worker makes in a year.

The driving forces behind the inequality gap are complex, and lie in the structure of executive compensation packages, Mackenzie says.

Consultants giving advice to corporate boards on how much to pay their CEOs only compare to other CEOs, perpetually driving up the average in the race to be above-average, he explains.

And many companies use stock options for a large part of their executives’ bonuses, a practice that not only drives up pay packages but also ties compensation to share price rather than company performance.

2. Do you CEO’s have  a greater risk of being sued or fired for non-performance?

3. Have your professor explain to you: Stock Options