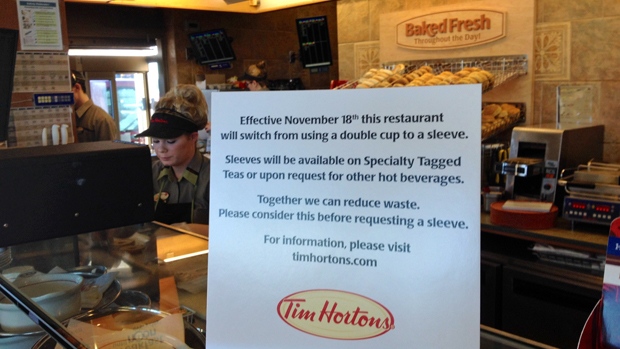 In the fall of 1993, a struggling realtor in Oregon named Jay Sorensen patented a cup sleeve. He’d been driving his

daughter to school, coffee in hand, and burned himself. He figured there had to be a better way.

He got into a battle with Starbucks, which later came up with a sleeve of its own. But Sorensen has made millions anyway.

According to PatentlyBrilliant.com, the patent for his Java Jacket ran out last week – November 9, 20 years to the day after he got it.

There’s no reason whatsoever to link one event to the other – but next week Tim Hortons finally launches a sleeve of its own.

Sometimes I just order an orange pekoe decaf tea at Hortons. And they always double-cup it. Seems like overkill.

Coffee drinkers will have to ask

Now my tea will automatically come in a single cup, a two-inch-wide collar of corrugated cardboard around it. If coffee drinkers want a sleeve, they’ll need to ask for it.

We have considered introducing a sleeve before,” says Alexandra Cygal, senior manager of public affairs, in an e-mail. “However the sleeve that we have chosen uses less material and has a number of performance advantages to ones we’ve looked at before.”

The Hortons model carries Canadian patent 2458487. It was issued six years ago to a guy named Matthew R. Cook, apparently of the U.S.

They take coffee sleeves seriously down there. Sorensen’s Java Jacket now has a place in New York City’s Museum of Modern Art. It shares space with Post-it notes, Bic pens and Band-Aids, in a display called Humble Masterpieces.

1. What happens to the patent after 20 years?

2. If we make an improvement to an old patent, may we patent this improvement?

3. Should Tim Hortons Increase the price of coffee due to the added cost of the Cup Sleeve?

Article written by: Paul Wilson of the CBC, to read more visit the CBC site