When you look at his vast technical accomplishments, it’s easy to forget he was a great marketer. 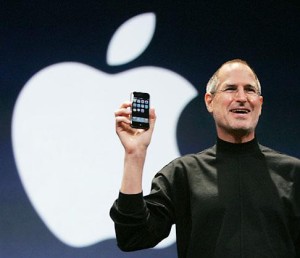 As a matter of fact, Apple co-founder Steve Wozniak said that marketing was Jobs’ greatest skill. Today, we look at his boldness as a marketer, how and where it first showed itself in his early 20s, his offer to pay for the Super Bowl ad time when the Apple board hated the famous “1984” Mac launch TV ad, his vindication when “1984” was cited as maybe the best TV ad of all time, his eventual ouster from Apple only one year later, and his return, 12 years later, in 1997. It was then that he commissioned the audacious “Think Different” ad campaign while, unbeknownst to most, Apple was just weeks away from bankruptcy. It was a huge gamble, but it secured the future of Apple. 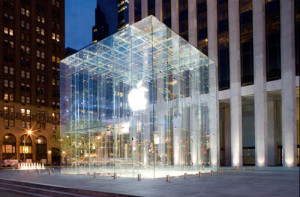 As his biographer Walter Isaacson notes, he even re-imagined a seventh industry – retailing. Just take one look at Apple’s 5th Avenue store in New York:

It all started on April Fools Day, 1976, when Steve Jobs and Steve Wozniak started Apple Computers in the Jobs family garage.

Below is the original Apple logo:

Their incorporation papers stated the company was worth $5,309. Four years later, it would be valued at $1.79 billion.

Watch the 1984 YouTube Commercial video that was launched at the Super Bowl:Apple 1984 Super Bowl Commercial

When the Apple board saw a preview of 1984, they hated it.

But here’s where Jobs unwillingness to compromise showed itself, even in his 20s. When the board demanded that Chiat/Day ditch the commercial and sell the Super Bowl ad time, Jobs objected, and offered to pay the $1.6 million dollars out of his own pocket.

The Apple board finally relented, and the commercial ran in the third quarter of Super Bowl 18.

Jobs was vindicated once this commercial ran, because 1984 has been consistently voted as the best commercial of all time.

It showed the advertising industry that a TV ad could have production values on the scale of a motion picture. It demonstrated that a commercial could be news. While over 77 million people saw it on the Super Bowl, all three major networks and 50 local stations did stories about it later that evening, where it’s estimated that an additional 43 million people saw it. The press gave it a viral life unprecedented in the pre-YouTube era. 1984 also single-handedly ushered in the age of Super Bowl “event commercials” that continues to this day.

That is why Steve Jobs pressed so hard to make sure 1984 aired – because it would establish a platform that would resonate for over 30 years.

But not long after that triumph, Jobs was fired from Apple in May of 1985.

He wouldn’t return for another 12 years.

1. View the following video Apple Commercial narrated by Steve Jobs, does Steve Jobs have an excellent sense of what customers needs are?

2. Did all the billions spent on Research and Development costs , pay off for Apple Inc.?

3. During Steve Jobs absence from Apple Inc. what were his greatest innovations?