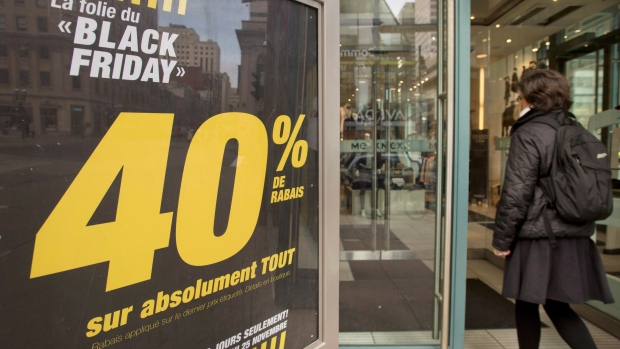 Canadian retailers are pulling out more stops this year to lure bargain hunters on Black Friday, but the promotional blitz may not reap the bottom line rewards many stores are hoping for.

From B.C. to the Atlantic Provinces, malls are opening before sunrise as the U.S. shopping phenomenon pegged to the day after American Thanksgiving makes further inroads north of the border.

But as much as retailers are hoping shoppers will be in a buoyant mood this far ahead of the traditional Christmas shopping season, there’s no guarantee their purchases will have a significant impact on retailers’ fortunes.

Brain sees a couple of reasons Canadian shoppers have not fully embraced the Black Friday phenomenon.

“We haven’t grown with the concept here in Canada, so like anything, it perhaps will take some time,” he says.

But another key factor is that Canadian consumers are turning more and more to retailers’ websites rather than just heading to stores.

Online shopping is increasing “to such a degree in popularity that it’s really the customer that dictates when they shop, how they shop, what they want,”

“The notion of a Black Friday just doesn’t really mean much if you’re totally in control of the shopping experience.”

Retailers, however, are doing what they can to exercise some control over the consumer dollar by offering shoppers plenty of opportunities to go to stores in search of Black Friday deals across Canada. In some cases, the retailers and shopping mall managers have ramped up their Black Friday strategy significantly over last year.

“They like to kick-start the holiday shopping season early. It helps to keep the dollars in Canada, keep people shopping locally instead of going across the border on Black Friday, because it’s a big shopping day in the U.S.”

At Future Shop stores across Canada, doors open at 6 a.m. (8 a.m. in Quebec), the same time as they would open on Boxing Day and a Black Friday first for the electronics retailer.

Cyber Monday is another American marketing term, designed to encourage consumers to shop

What about Boxing Day?

But Boxing Day is still really the largest one in Canada

Still, for all the efforts retailers are putting into trying to lure customers, there is no guarantee their bottom lines will be significantly bolstered once all the Black Friday sales have been tallied.

“It’s great for the consumer,” Chan says. “But it’s not so great for the overall economy. Our retail economy … can’t survive on this kind of constant promotion and so to have yet one more day when they’re going to slash their prices, something’s going to have to give.”

In her mind, that means retailers “can’t have both Black Friday and Boxing Day.”

She’s not sure Black Friday is the day for Canadians because “it doesn’t mean anything to us,” and doesn’t seem to have much context beyond being a big kickoff day for holiday shopping in the U.S.

“Canadians will vote with their dollars,” she says.

“If consumers come out in droves for these Black Friday sales, then we know they want it, but it’s not going to help our retail economy at all.”

1.      Has the Black Friday hype, lured you to shop early for bargain deals?

3.    Does promotion play a vital role in shopping behaviour?