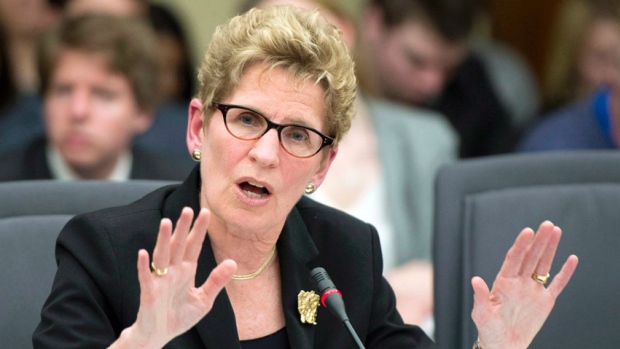 The government of Ontario Premier Kathleen Wynne announced on Jan. 30 that it was raising minimum wage to $11 an hour starting June 1. Canadian Press

Ontario premier and U.S. president both champion giving the poorest a raise!

This week, Obama and Wynne talked about raising the minimum wage, with Ontario announcing on Thursday that the rate would rise to $11 an hour starting June 1.

Left-of-centre politicians want to raise the wages of the very poorest. From a humanitarian point of view, it seems an easy choice. Just listen to some of the recent interviews on CBC’s The Current with people trying to raise kids while making minimum wage. Half of minimum wage earners in Ontario work for large corporations. The idea of corporate executives, members of the One Per Cent, getting richer and richer while their workers can’t feed their kids properly is not an appealing thought to many Canadians.

A loud voice of opposition

We should note here that a huge majority of businesses pay most of their employees more than the minimum, and there are good reasons for doing it. According to a recent Statistics Canada report, “in 2009, some 817,000 people were working at or below the provincial minimum wage. This represents 5.8% of all employees in Canada, a slight increase compared with the 5.2% recorded the previous year.”

But those businesses that don’t want to pay higher wages to their minimum wage employees represent a loud voice of opposition.

They are supported by a very traditional market argument that says raising minimum wage results in fewer jobs and is thus bad for the wider economy. Of course, the extension of this argument is that no minimum wage at all would be even better for the economy. If you think that, it is time for you to emigrate. There are many countries with no minimum wage.

It struck me then, as it strikes me now, that in a society that sets a minimum standard for what people need to live in terms of health care, housing, social support and other things provided by taxpayer funded services, allowing employers to pay less than that standard is in effect a taxpayer subsidy to the employers. In this scenario, those hiring low wage workers are not paying the full cost of doing business, and neither are their customers.

By this way of thinking, the kind of jobs that Canada needs, to build the kind of economy Canadians want, are not minimum wage jobs. The jobs we need are those that pay a wage sufficient to live an acceptable Canadian lifestyle. And that is what most Canadian employers do.

But these kinds of arguments do not mollify those who oppose a rise in the minimum wage. Perhaps they need a colder, more economic argument.

And here is where Stephen Poloz comes riding to the rescue with his latest warning about disinflation. Poloz’s job as Bank of Canada governor is to keep Canadian inflation at two per cent.

The importance of keeping inflation high enough is a traditional economic argument at least as old and as strong as that against raising minimum wage. I have explained the argument here and here, so I won’t repeat it.

The important point is that disinflation can lead to deflation, which causes economies to seize up and begin to shrink.

The conventional way to drive off disinflation and boost inflation is to cut interest rates. But the central bank and the government are both wary of that, for fear it spurs a new round of borrowing in a population that has already borrowed too much and pushes up house prices to unsustainable levels.

And here is the great opportunity. By gradually raising minimum wage, some small fraction of the six per cent of minimum wage jobs may or may not disappear. But the payoff will be huge, as the whole economy will be saved from disinflation. Poor people spend their money; they don’t use it to bid up assets. But they can bid up prices, starting the slow cycle that leads to increased inflation.

Not only that, but employers that are forced to pay higher wages will also raise their prices slightly to cover the added costs. If customers won’t pay a few cents more for their burgers and dollar-store items, then that is an economic signal Canada, as a country with minimum social standards, cannot afford those products and services.

Up till now, governments and central banks have cut interest rates and printed money. They admitted that pumping money into the economy had the effect of bidding up the stocks and property owned by the rich, making the rich richer. When some objected, they said sacrifices had to be made; it was the only way to save the economy.

Now, we must save the economy from disinflation and evil deflation. While some may object to the poor becoming richer, sacrifices must be made. So far, the rich have taken all the flak for benefiting from the government’s economic rescue strategy. Now it is the turn of the poor to get a little richer to benefit us all.