Global efforts to stop companies from eroding tax base by moving profits offshore have no teeth, experts say 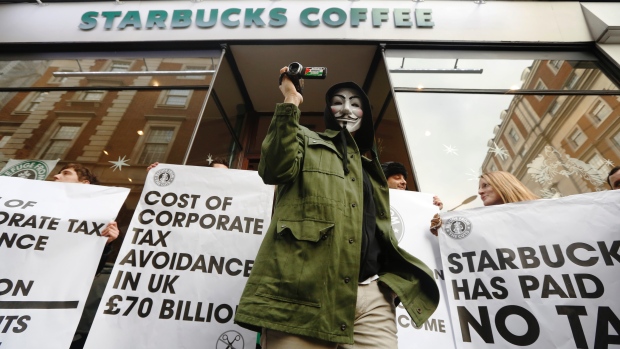 In December 2012, demonstrators led a country-wide protest against Starbucks over the coffee chain’s tax evasion tactics.

A Reuters investigation found that through the magic of profit shifting, the company had avoided paying any tax in the U.K. for three years – at a time when ordinary Britains were being asked to accept tough austerity measures. (Luke MacGregor/Reuters)
“I am proud to be paying taxes in the United States,” radio DJ Arthur Godfrey once said. “The only thing is, I could be just as proud for half of the money.
That’s certainly been the attitude of many companies of late. In a banner year on the stock markets, multinational corporations seem to have redoubled their efforts in 2013 to keep as much of their profits from the taxman as possible.

“Some rules … were built on the assumption that one country would forego taxation because another country would be imposing tax,” the OECD said in a recent paper on international tax evasion. “[But] vast amounts of money are kept offshore and go untaxed.”
U.S. think-tank the Public Interest Research Group recently calculated that the amount of profits being held in Bermuda by America’s 100 largest companies was more than 10 times the island nation’s entire GDP.For decades, multinational corporations have used tax havens like the Cayman Islands, Bermuda, the Isle of Man and Luxembourg to shield profits from tax authorities without running afoul of the law. More and more, real profits derived from real business activity are shifted around the world through numerous local subsidiaries to take advantage of specific tax loopholes. 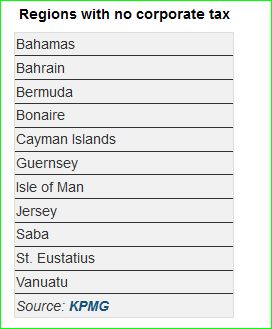 In one famous case uncovered by the Guardian newspaper, the cartel that controls two-thirds of the global trade in bananas banked more than $50 billion US in sales in one five-year period. But by the time the accounting was done, the total profits on those sales amounted to only $1.4 billion, on which the three members of the oligopoly paid a mere $200 million in tax.
Research firm Audit Analytics said recently the amount of profit being moved offshore by U.S. companies has risen by 70 per cent in the last five years and hit nearly $2 trillion in 2013.
The scale of profit shifting can be jaw-dropping. In 2012, the Cayman Islands received more foreign direct investment than Japan, World Bank data shows.

The amount of genuine economic activity happening in Japan is almost certainly exponentially higher than in the Cayman Islands, but yet there’s more money passing through the latter.
A recent U.S. government report found that a five-storey building in the Cayman Islands, whose only actual tenant was a law firm, was in fact the mailing address for 18,857 foreign companies.
Tech companies among worst offenders
In 2013, much of the coverage of corporate tax evasion focused on two giants of the technology industry: Apple and Google.
Apple CEO Tim Cook was hauled in front of a Congressional hearing in May to explain how his company managed to avoid paying U.S. tax on at least $74 billion in profits between 2009 and 2012.
Cook retorted that with a $6 billion tax bill in 2012 alone, Apple likely paid more U.S. tax that year than any other company, but the bad optics were hard to ignore.
Google, for its part, employed two curiously named techniques known as a “double Irish” and a “Dutch sandwich” to book most of its foreign profit through a subsidiary called Google Ireland Ltd. and avoid paying $6 billion in taxes last year, regulatory filings show. (See the sidebar on the right for an explainer of how they did it.)
• Apple CEO Tim Cook grilled on Irish tax scandal
• Tax havens explained
• How Canada’s banks help money move in and out of tax havens
Even boring old General Electric booked $108 billion worth of its profits overseas, outside the reach of U.S. tax laws.
With eye-popping numbers like that, tax authorities say they are cracking down.

Tax Havens will continue to exist

Subsidiaries of multinationals colluding to shift money around to avoid tax “should be the situation in which everyone concerned … pounces on it and says ‘You can’t do that’,” tax lawyer Michael Durst told a November 2012 conference aimed at closing tax loopholes. But the fact is most countries play along, and as long as even one country finds it in its best interest to kowtow to a multinational corporation, tax havens will continue to exist.
“Canada doesn’t have a lot of multinationals, and we’d like to have more,” Christians said. “How are you going to do that if you’re taxing them out of step with everybody else?”

Drop the corporate tax rate
South of the border, there is already a movement afoot to drop the corporate tax rate dramatically to compete with low-tax jurisdictions. Democratic Senator Max Baucus of Montana is sponsoring a bill to that effect, and while such a cut would cost Uncle Sam a lot of money up front, Baucus hopes to recoup some of that by limiting the amount of profit that American companies can keep overseas and still be allowed to do business in the world’s largest economy.

The real hope for substantive tax change, Christians says, lies in the rising public awareness of the issue and the kind of protests seen in Britain in 2012 when people questioned why companies like Starbucks were allowed to skimp on taxes at a time when individual taxpayers were facing harsh austerity measures.
• See which Canadian banks operate offshore
• Massive data leak exposes offshore financial secrets

See how the Rich Hide their Money

1. Should Canada reduce corporation tax to nil? Will this tax measure stop tax evasion, if yes where should we collect taxes from?

2. Why are countries accepting  corporations that pay no taxes?

3. What is the solution to paying taxes?