From Chocolate to What!

Feb 18, 2014 — When Hershey’s had a plant in Smiths Falls, Ontario, you could smell chocolate from miles away. But not a single chocolate bar has rolled off the line since the plant closed in 2008, one of six employers to leave the town at the same time.

Now, Smiths Falls, a working class town of about 10,000 in Eastern Ontario, has a new industry: medical marijuana. Health Canada is changing its medical marijuana rules, and Tweed, a licensed marijuana production company, has just received its license to grow medical cannabis there. Some are hoping the new plant will bring much-needed jobs to an area that’s had it tough for the last few years. 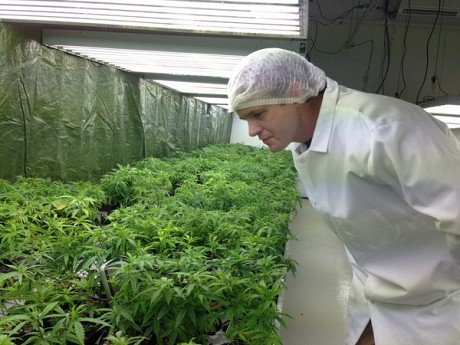 Tweed’s grow room is kind of like Willy Wonka gone 21st century. Except, instead of chocolate, it’s pot.

Master grower Ryan Douglas has me put on a lab coat, hair net and booties, an outfit I associate more with lunch ladies than with marijuana growers.

We walk along the rows of plants, and he tells me there are about 3,000 growing here.

“This is called L.A. confidential,” Douglas explains. “And that has a reputation for being good for things like chronic pain or insomnia. So if you’re having trouble falling asleep due to pain this is a strain we’d recommend for you.”

The old Hershey’s plant is transforming fast. This just the first of 28 rooms where Tweed will grow marijuana for national sale. Construction workers are building walls and hanging up lights, in preparation for the day that Tweed can officially start business: April 1, when Health Canada’s new medical marijuana regulations go into effect.

Philippe Lucas researches medical cannabis access in Canada. He’s also a medical marijuana patient. He says industry is poised for a big role in the country’s medical marijuana future: “What’s happening in Canada is unprecedented anywhere in the world. We have a federal government that’s allowing theoretically an unlimited number of licensed cannabis to establish themselves and test the market.”

But that will all change staring on April 1. Patients won’t have to get Health’s Canada’s approval to access medical marijuana. And they also won’t be able to grow their own anymore. Instead, if their doctor prescribes medical marijuana, patients will go directly to authorized suppliers, like Tweed.

As for the jobs, White says he’ll believe it when he sees it: “Well they’re bringing some jobs but I don’t know about a hundred. I can’t see it taking 100 people to grow some pot.”

And White wonders why, of all places, Tweed chose his home town: “What kills me is, why Smiths Falls? You know, like, this is just a little wee hick town.”

But for mayor Dennis Staples, the question is, why not? If it’s going to happen somewhere in Canada, why shouldn’t Smiths Falls do it?

Why not grow your own pot!

But not everyone is happy with the new Canadian system. A class action lawsuit has been filed against Health Canada in federal court. The plaintiffs claim that they have a constitutional right to produce their own marijuana or have somebody do it for them.

Tweed’s new production facility doesn’t look totally industrial yet, but companies across Canada are scaling up. Health Canada says the market is there, and that the number of people using medical marijuana could top 450,000 in the next ten years.

Tweed CEO Rafici says that perceptions of marijuana are changing: “It’s becoming less taboo and as that happens we’re going to help move that along and make it a more acceptable medicine for people to consider.”

In Canada, it’s industry that’s shepherding marijuana into the mainstream.

1. What costs should be capitalized during the growing stages of marijuana?

2. Do you think the product will have an expiry date?

3. What are some internal controls that should be put in place during the harvesting season?