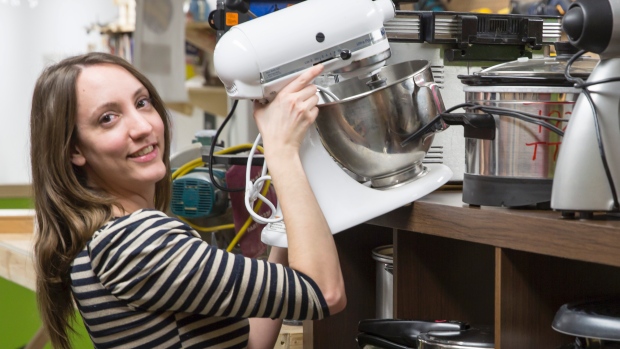 The “light-bulb moment” that sparked Dayna Boyer’s entry into the sharing economy came when she wanted a juicer.

She loves cooking, but as someone who has lived much of her adult life in small apartments and condos, she’s never had an overabundance of space for specialty kitchen appliances. Nor had she the finances to buy the pricier ones.

Still, she had her eye on a juicer. Anyone she talked to told her the same thing, though: “You’d use it for a month and then it would sit in your cupboard collecting dust, taking up space and you’d never use it again.”

Then the light bulb went off. Maybe there would be virtue in offering a service where people could borrow or share for a time — for a modest annual fee — kitchen appliances they might not have the space to store, the money to buy or the need to possess full-time on their own.

“Finances and space don’t need to be barriers to healthy cooking,” says Boyer, founder of the Kitchen Library, which opened its doors in east-end Toronto last fall and now has about 50 appliances on its roster.

In launching the Kitchen Library, Boyer became a participant in what has become the sharing economy, a worldwide phenomenon that has turned the age-old practice of sharing into an internet-fuelled economic juggernaut worth many billions.

“Anything connected to the sharing economy is very exciting,” says Boyer. “It’s such a growing industry.”

From car and bike sharing services that now dot some of the world’s larger cities to the high-profile Airbnb that helps travellers find overnight rooms in homes worldwide, the sharing economy has become an economic entity the Economist magazine and others have noted could be worth $25 billion or more.

Other initiatives are more institutional, like perhaps helping municipal governments or downsizing corporations find ways to share underused assets such as space. Still others give people a chance to share skills or outsource errands.

“There isn’t a single sector that hasn’t been affected by this,” April Rinne, chief strategy officer of the consultancy the Collaborative Lab in San Francisco, said in an interview on CBC’s Metro Morning earlier this year.

In Vancouver, the three-year-old Tool Library has grown to include more than 800 members who have access to more than 1,000 tools.

“I think people really got behind the idea that they didn’t need to own the tool, they needed access to it,” says co-founder Chris Diplock, who has led research into the sharing economy in Vancouver.

Recently, however, there has been some debate over whether the sharing economy is a good thing, whether sharing goods and services is a practical, money-saving venture, or merely a way to exploit those who need to rent some of their belongings out of economic need, particularly since the economic downturn in 2008.

But whatever its merits, there’s no doubt the rise of the modern sharing economy is a result of an evolution in the way people communicate.

“This idea goes back a long way in terms of the internet. Now, we think about the sharing economy as being about hotels and car services and that kind of thing. But if you think about the early days of eBay, in many ways it was the same idea, which was that people had junk in their basements and they went to eBay to sell it to other people who might have found value in that junk.”

Last year, for example, two Quebec homeowners were ticketed for renting out rooms to tourists without a permit.

“It’s a worrying trend…we should be thinking about protecting the hotel industry and preventing tax evasion,” Quebec’s tourism minister at the time said. “But, at the same time, we have to realize that people want to travel in different ways.”

(Thousands of people list their apartments or homes for short-term rentals on Airbnb. And in New York, it’s especially popular. But while renters and travellers love the service, many people do not, and they’re all trying to figure out how to navigate the law. Hear Colleen Ross’s report on Airbnb on The World This Weekend on Sunday, April 20 at 6 p.m. ET (7:30 p.m. NT) on CBC Radio One or on Sirius at 6 p.m. and 9 p.m. ET.

3.      Is sharing a good idea for business? How should we account and keep track of sharing costs?