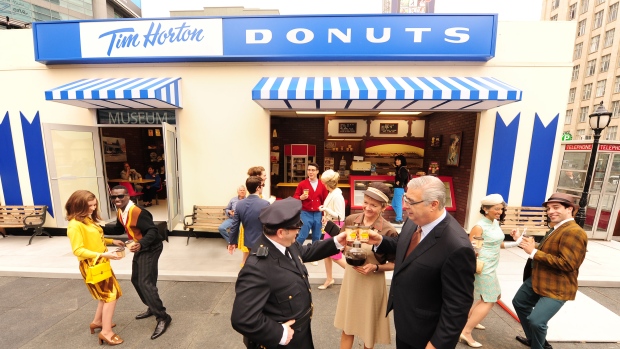 Is celebrating the 50th anniversary of the opening of its first location, and today the coffee and doughnut giant created a temporary replica of Store No. 1 and plopped it into a busy city square.
The installation, staffed on Thursday with servers dressed in Mad Men-era uniforms handing out goodies to passersby, wasn’t unveiled in Hamilton, the real home of Tim Hortons’ first site.
Instead, the corporation rolled out the blast from Canada’s past in downtown Toronto’s Yonge-Dundas Square.

Opened in Hamilton on May 17, 1964, inside a converted car repair garage on Ottawa Street North at Dunsmure, The restaurant took its name from founder Tim Horton, who just weeks before launching the business won the Stanley Cup with the Toronto Maple Leafs.

Over the past 50 years, Tim Hortons has grown from its Hamilton beginnings to become the dominant coffee and baked goods chain in Canada, with more than 4,000 locations, as well as approximately 800 in the U.S. and more than two dozen in the Middle East.

Tim Hortons said it will continue to celebrate the anniversary by offering a free “birthday cake” doughnut at participating locations across Canada.
“Guests can also look forward to the release of a commemorative online video, which will capture the hearts of Tim Hortons fans who have grown up drinking Canada’s favourite coffee,” the restaurant chain said in a statement.

The original Ottawa Street location stills exists, but looks nothing like it did in 1964.

1. Do you see a continued growth for Tim Horton?

2. Was Tim Horton successful in the United States? Research the internet.

3. Why do you like Tim Hortons’ coffee? What is your favourite coffee shop?