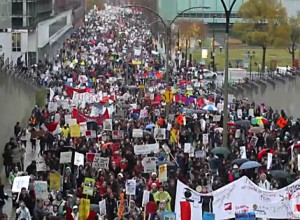 Quebec students proved they are serious about fighting tuition fee increases as thousands  skipped classes and marched through the streets of downtown Montreal on Thursday to demonstrate their opposition.

For Martine Desjardins, president of the Federation Etudiante Universitaire du Quebec, the boycott was a success — both because of the number of students who rallied and because it all went peacefully. Police put the crowd, unofficially, at about 15,000;  “I asked for calm because I didn’t want any violence to interfere with the message,” Desjardins said after the march had disbanded.

The message, she said, is that students aren’t alone — that the fight against tuition fee hikes has become a societal issue.

Some 10,000 people from across Britain were expected to join the demonstration against the education policies of the coalition government. It was the biggest protest in London since the capital and other English cities suffered four days of rioting in August, the worst urban violence for decades. The students are angry at the government’s education plans which they argue amount to privatisation of the system, and last year’s decision to hike university tuition fees and cut attendance payments for poorer teenagers

1. Will  the increase education costs affect your decision to attend University?

2. Should University be accessible to all at no cost?

3. What do you think will happen if University Education is available to all , will the quality of education increase or decrease? discuss.