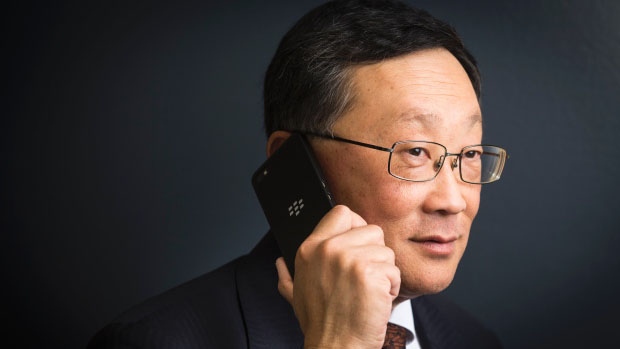 BlackBerry reported a steep drop in revenue and a widening loss as sales of its smartphones continue to slide.

The smartphone maker says it lost $423 million US in the fourth quarter of fiscal 2014, as revenue for the three-month period fell to $976 million — a 64 per cent decline from $2.68 billion a year earlier.

It’s the first time since late 2007 that the company’s quarterly revenue has dipped below $1 billion.

The smartphone maker said the loss amounted to 80 cents a share compared with a profit of $98 million or 19 cents per share a year ago.

But excluding several one-time items, BlackBerry said it had an adjusted loss from continuing operations of $42 million or eight cents per share for the quarter. That beat analyst expectations, which called for a per share loss of 57 cents

The smartphone maker reported $6.8 billion in revenue for the fiscal year, down 38 per cent from $11.1 billion in the previous year.

However, the company said its margins grew to 43 per cent, an increase from 34 per cent in the third quarter.

But sales of phones continued to slide. The company sold 3.4 million smartphones to customers in the fourth quarter, and of those 2.3 million phones were BlackBerry 7 devices, not the company’s newer Z10, Z30 and Q10 devices.

Looking to break even

In its outlook, BlackBerry says it is targeting break even cash flow results by the end of its 2015 financial year — next March. Over the past quarter, the company’s cash reserves shrank by $500 million.

At the beginning of March, the company says, it had $2.7 billion US in cash on its books, down from $3.2 billion at the end of November.

Cash inflow from the sale of assets

Earlier this month, BlackBerry announced it would sell the majority of its Canadian real estate, which should bring a temporary cash infusion in June, when the sale is expected to close.

Faced with mounting losses and high costs, the company cut 4,500 jobs in September — 40 per cent of its workforce.

In November, Chen took over and quickly implemented a two-year turnaround plan.

In an interview with Amanda Lang on CBC’s The Lang & O’Leary Exchange, Chen says he’s committed to the turnaround.

“I hope you see that in the last few months, we’ve been very focused on trying to tell our story, talking to the press, doing media interviews,” Chen said.

“Normally I shouldn’t be doing this. But I figure this is very important that the market knows that we’re here and we want to fight.”

In the conference call, Chen said the plan is on track, and may even be ahead of schedule. Use of cash for operational costs are down 30 per cent in the past quarter alone.

1.      After watching the video, have your expectations about Blackberry changed?

2.      Would you consider purchasing shares in Blackberry today?

3.      Mr John Chen is a turnaround specialist and he knows he is good at his job? How long do you think it would take to turnaround a company of Blackberry size and what does he have to do today to make the turnaround efficient?