In 2008, two men, one American, one Canadian, catapulted investment fraud into headlines around the world.

The Canadian was 67-year-old Earl Jones, a Montreal native who bilked 158 investors, including his cancer-stricken brother, his own daughter and other family members, out of $50 million. Like Madoff, Jones had managed to get away with his Ponzi-type schemes for a long period of time, about 30 years in his case. In 2010 Jones was sentenced to 11 years in jail, which in Canada means he could be released after serving only one-sixth of his sentence, depending on his behaviour behind bars. Madoff, on the other hand, will almost certainly die in prison. 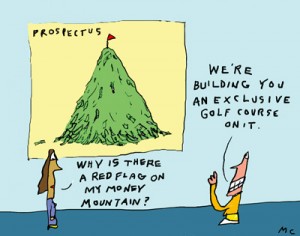 Too good to be true

Although it’s impossible to prevent all potential victims from being scammed, there are many telltale signs an investment opportunity might not be legitimate. If advisers are aware of what to look for, they should be able to help clients avoid losing money unnecessarily.

3.  When a potential investor shows an interest con artists first feign reluctance to share his good fortune but gradually relents.

4. Fraudsters announce that  the deal is happening faster than scheduled

1. Although the con man had cards and letterhead for an office in a downtown high rise, it was no more than a mail drop-off box. Who would invest large sums of money with someone who only held meetings at a greasy spoon?

2. He had a website that glowed with his accomplishments and recommendations from previous investors. But apart from the website there was nothing about him in the main Internet search engines. That was a result, he explained, of his penchant for privacy and his policy of offering opportunities only to small and exclusive groups.

3.The other major red flag was the ticking clock. Like many a movie plot, a con man’s story includes an impending deadline. Any time an investor is told it’s now or never — leaving no time for effective due diligence — the investor should immediately step away from the deal.

Doing business with a seemingly respected broker does not guarantee that investment fraud won’t occur. There are too many cases of brokers misusing clients’ money to dispel that notion.

Alwasys be careful not to sign any papers sent by the broker without obtaining professional advice on what the papers state.

These days a lot of the smaller investment frauds are launched via the Internet. Although many people — hopefully most — are aware of the variations in the so-called Nigerian scams that offer large amounts of money to help someone access a small fortune in some foreign bank, they do occasionally work.

To read the complete article visit: David Malamed, CA·IFA, CPA, CFF, CFE, CFI, is a partner in forensic accounting at Grant Thornton LLP in Toronto. He is also CAmagazine’s technical editor for Fraud

1. Do you know of any scams or of anyone personally close to you that has been scammed?

2. What are some of the Red Flags that may demonstrate a potential scam?

3. Has the internet reduced or increased the potential for fraudsters to prosper in the investment industry?