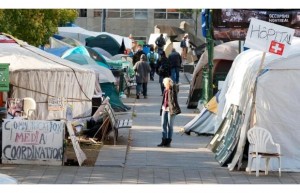 if you’re looking for Canada’s richest 1%, the compensation tables in the proxy circulars of Canadian publicly listed corporations are a good place to start.

Canada’s CEO Elite 100 — the 100 highest paid CEOs of companies listed in the TSX Index — readily surpass this entrance requirement: Their total average com­pensation hit the heady $8.38 million mark in 2010. That represents a 27% increase over the average $6.6 million they pocketed the previous year.

The lowest paid among Canada’s CEO Elite 100 ‘earned’ $3.9 million in 2010.   Soaring executive salaries have played a significant role in driving the growth in income inequality in Canada. In 2010, 188 of the CEOs of companies in the TSX Index had enough compensation to get them into the 0.01 %club.

In the words of the Occupy movement, what about the 99%?

In stark contrast to Canada’s CEO Elite 100, Canadians working full-time, full-year for the average weekly wage earned a humble $44,366 in 2010.

Canadians are feeling the squeeze of shrinking disposable incomes, a rising cost of living, and record-high household debt.

What are people saying about Occupy Montreal/Wall Street

“I think that there’s a process and people are becoming more aware that they can and should do something political to force the government to do something about economic injustice. In that sense, I think it was very successful.”

“In an objective way, it’s changed people’s ways of thinking and speaking about the rich. We’ve done that for the country. As un-ideal as ‘The 99%’ is, it has focused people on the 1%.” Indeed — hard to imagine Mitt Romney getting the media ride he’s gotten had OWS (Occupy Wall Street) not focused attention on wealth inequity in the world’s richest country.